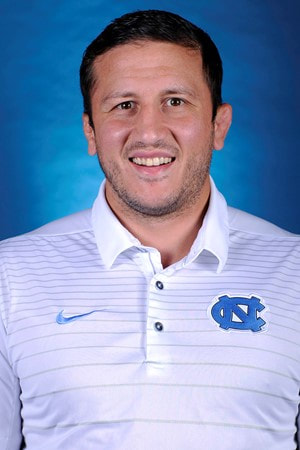 ​My Name is Coleman Lewis Scott I was born April 19th, 1986 in Waynesburg, Pennsylvania to James and Mary Scott. I have 2 sisters Amelia and Kaitlin. I am a first generation wrestler for the Scott family but was introduced to the sport by my youth soccer coach and at the age of 6 at which time I fell in love with the sport. I had some success early on in my youth participation, which kept me hungry for more as I continued to develop my technique and work ethic. I was very fortunate to grow up in in southwestern P.A., which is known as one of the toughest wrestling areas in the country. I wouldn’t be as successful as am if it wasn't for my youth coaches, Joe Throckmorton, Ronnie Headlee, and John Yates. They led me from little league all the way through high school. They understood what high level wrestling was and made sure I was surrounded by greatness.

As a high school freshman I weighed about 105 pounds but for the betterment of the team I wrestled at the 112lb weight class, that year I finished 6th place at the state tournament. I went on to win 3 consecutive state titles from 2002-2004 as well as 2 junior freestyle titles. Post high school I attended Oklahoma State University where under coach Smith my teammates and I won 2 team NCAA tittles and 1 NCAA individual title.

After Graduating from OSU I wanted to chase my childhood dream of becoming an Olympic Champion. I stayed in Stillwater, OK for the next 6 years solely training to become the best in the world which helped me come away with the bronze medal in the 2012 Olympics. One of the greatest moments in my career was being able to share that moment with the 96 members of family and friends that joined me in London. Family means everything to me and it was important for me to show them that winning that medal was for them.

As my competitive career was coming to and end I knew I wanted to become a college head coach and in 2014 I was given an awesome opportunity to join The University of North Carolina at Chapel Hill wrestling staff. In 2015 at the age of 30 I was able to fulfilling another dream of mine and I was named head wrestling coach, making me one of the youngest in NCAA division 1.
​
One of the happiest moments in my life on or off the mat was October 9th, 2010 the day I married Jessica Brooks we now have children Leighton, Stetson, and Cash and we are continuing to grow as a family in Pittsboro, NC and love that we are able to make UNC our home for good.