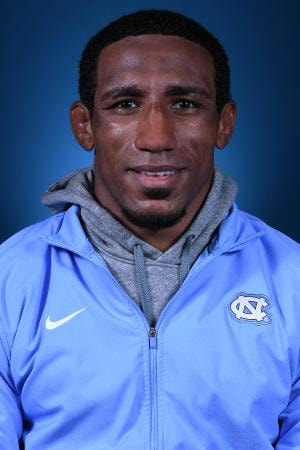 2021-22 (Graduate Student): Went 21-4 overall and 12-1 in duals at 141 pounds for the Tar Heels • Started the season on a 15-match win streak • Earned three wins over ranked opponents • Defeated No. 5 Chad Red Jr. of Nebraska on Nov. 17 for the highest-ranked win of his career • Received ACC Wrestler of the Week honors on Nov. 23 • Earned ranked wins over No. 22 Collin Gerardi (Virginia) and No. 24 Ryan Jack (NC State) • Qualified for NCAA Championships in Detroit as a 15 seed • Made a run at NCAA Championships before falling to No. 1 seed Nick Lee of Penn State, 10-3 in the finals • First African-American finalist in program history • 2022 NCAA All-American

2020-21 (Redshirt-Senior at American U): Unable to compete at the EIWA Championships, the program's only meet due to a COVID-shortened season • Advanced to the semifinals of the 2021 Last Chance US Olympic Trials Qualifier in April, 2021 • Had a 2-1 record at 65 kg, eventually losing to two-time All-American and 2020 US Open finalist Evan Henderson who became a qualifier • Placed fourth at the U23 Junior Nationals in freestyle in November, 2020.

2019-20 (Redshirt-Junior at American U): Named NWCA All-American Honorable Mention after the canceled NCAA Championships due to the COVID-19 pandemic • Also an NWCA Scholar All-American • Team MVP • Moved back down to 149 pounds and became one of the top wrestlers in the nation • Ranked 7th at 149 in both the first and second NCAA Coaches’ Panel rankings (released 1/24 and 2/13) • Ranked 12th in the third release (2/27) • Earned an automatic spot at the NCAA Championships with a fourth-place finish at the EIWA Championships, going 3-2 overall • Finished the season 36-7 overall, spending much of the year leading all wrestlers in the nation in wins • His 36 wins rank third all-time at AU for wins in a single season • Has a career record of 79-33, already ranking 17th all-time at AU in career wins with another season of eligibility remaining • Has 17 major decision victories in his career to rank tied for eighth all-time in program history, with his seven career technical falls ranking tied for seventh all-time • His four tech falls in 2019-20 are tied for ninth all-time • Went 9-3 in duals with 34 points scored and only nine against • Went 4-0 overall in tech falls and 8-0 in major decisions • Started the season 19-0, going undefeated through four meets (first place at Battle at The Citadel, AU Round Robin, Navy Classic and Patriot Open) • Finished fifth at the prestigious Midlands Championship at 7-2 overall • One of two dual losses was to #1 Austin O’Connor of UNC (5-3 in SV) • Earned an EIWA Academic Achievement Award for a third year in a row.

2018-19 (Redshirt-Sophomore at American U): Moved up to 157 to help team with logjam at 149 • Just missed getting his first trip to Nationals, losing a close match in the consolation third round at the EIWA Championships and finishing in seventh place • Posted a 21-8 record at 157 after moving on 11/30 • Won Mat-Town Open bracket at 157, carrying four-bout winning streak into EIWAs • Went 6-5 in dual matches, but four losses starting 1/12 came against ranked opponents • Losses by close decisions helped Eagles go 7-1 in final eight dual matches • Won Wilkes Open with 4-0 mark • Third at Patriot Open after going 4-1 • His 27 wins overall were third on the team• His six wins by major decisions tied Colin Shannon for first on the team • Named an NWCA Scholar All-American • Earned an EIWA Academic Achievement Award.

2017-18 (Redshirt-Freshman at American U): Went 16-13 overall and 5-4 in dual matches • Went 1-2 at 149 pounds at the EIWA Championships • Won his opener, 4-1, over Brett Kulp of Franklin & Marshall, but lost his next two bouts • Had a 3:38 WBF over Trevor Mello in a dual victory over George Mason • Also had a SV-2 loss in a dual to #17 Luke Karam at Lehigh and a 3-2 loss to #20 Nicholas Gil of Navy • Other dual wins came at Campbell, vs. Duke (21-3 TF, 6:43), at Brown and vs. Drexel • Finished 6th at the Wilkes Open after going 5-1 • Went 3-2 at the Navy Classic and 1-2 at the Cliff Keen Las Vegas Invitational • Earned an EIWA Academic Achievement Award.
2016-17 (Redshirt at American U): Placed at six tournaments during a strong redshirt season • His 32 wins were second among all AU wrestlers (Gage Curry, 35-9) • Won the Messiah Open, winning all four bouts, including two major decisions and a tech fall • Beat Jhared Simmons of Maryland, 13-4, in the final • Third at the Southeast Open to begin the season, going 4-1 • Fastest fall of his first collegiate season was 1:51 win over Kellen Devlin of NC State in the 3rd-place match • Also 3rd at the Wilkes Open, going 5-1, including a 7-3 win over Robbie Rizzolino of NC State in the 3rd-place match • Earned 5th at the National Collegiate Open with a 5-2 mark that included two major wins • Fifth at the Warriors Winter Open, losing his first-round match and winning four straight afterwards • Beat Kenan Carter of ODU in 5th-place match • Also 6th with a 4-2 mark at the Storm Open • Had eight major-decision victories.
Personal/Prep: Kizhan Clarke is the son of Constance Mikula and Jariah Clarke • Attended Riverview High School in Tampa, Florida • Coach William Sargable • State champion wrestler, the first at Riverview • Two-time Florida state finalist • A Disney Duals All-American • Finished high school with a 165-32 record.